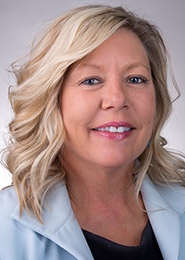 Ford currently works with membership retention and recruitment while overseeing the operating budget of the Chamber.

In addition, Ford is a current board member for the United Way of Blount County. She is also a past board member of the Blount County Children’s Advocacy Center, Kingdom Design Ministries and past president of the Knoxville Regional Celiac Support Group.

An active community volunteer, she has dedicated her time to assisting the United Way of Blount County by participating in Loaned Executive, Day of Chairing Chair, Pacesetters Campaign, Allocations Panel and the Marketing Committee. She is also a Tennessee Achieves mentor and a member of the East Tennessee Regional Leadership Class of 2017.

Ford has one son, Cole.